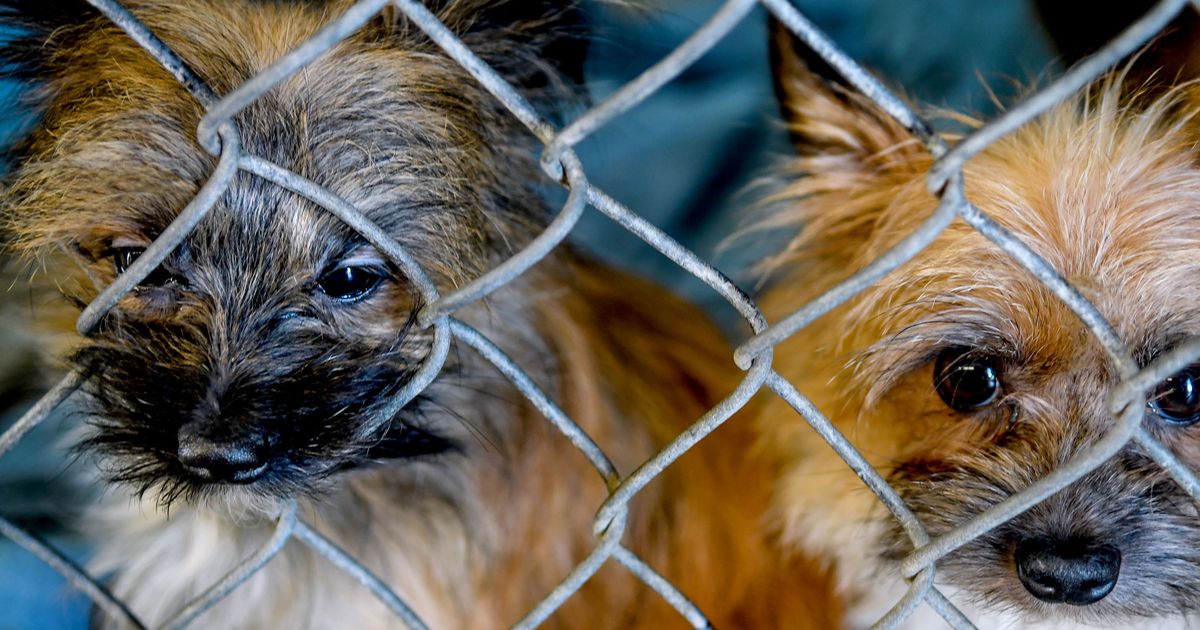 
On a normal day, the Kootenai Humane Society is home to maybe 20 dogs and several cats.

More than 80 dogs were crammed into its facilities on Wednesday after local authorities came across an accumulation of animals in an abandoned house in Kellogg on Monday afternoon.

Debby Jeffries, executive director of the Humane Society, said she had never seen such a case of hoarding. On Monday, she received a call from animal rescuers at Shoshone Pet Rescue telling her they had found at least 30 dogs in a house.

“Then they started to find more and she said, ‘Oh, by the way, there are 64 dogs. I said, ‘How many are there?’ Jeffries said. “I think my jaw fell on the desk.”

It turned out that there was more to it. Some were hiding in the floor and walls.

Animal rescuers and local police found several puppies between five and eight weeks old. They found five pregnant bitches, one of which gave birth to a trio of puppies at KHS shortly after arriving.

KHS got most of the dogs, including the pregnant adults and four of the cats. The Kellogg Veterinary Clinic has taken in eight adult dogs and five puppies, and some have gone to foster parents.

One dog was euthanized at the clinic and one of the original 85 dogs was found dead on the property, ending with 83 dogs in total.

“As far as I’m concerned, these dogs were in the best shape for the conditions they were in,” Jeffries said.

The dogs were also small and loud, leaving Jeffries confused as to how no one had heard them.

Kellogg Police Sgt. Paul Twidt said the case had also baffled him. Last Tuesday, Twidt visited the house on a civil emergency call, at the landlord’s request to resolve a dispute with his tenant.

Although he never went inside, Twidt said he couldn’t understand how he didn’t hear any animal noise.

“I spoke to pretty much every neighbor and they all said, ‘Not only did we not know there were 80 dogs, we didn’t know there was a dog,’ Twidt said.

While mounting an animal cruelty case against the dog’s owner, Twidt said he believed there was likely a large basement where the owner kept the dogs.

Although the dogs appeared to be fed, Twidt said the owner’s abandonment of the animals was enough for them to pursue several counts of animal cruelty.

The company was happy to take them, said Vicky Nelson, KHS director of development, but it was a strain on resources.

KHS is funded by donations from the community, and Nelson said the number of dogs has put a strain on their staff and medical equipment.

“Seeing those little faces, yes, it’s difficult. It’s exhausting and it’s not something I want to do every day, but it’s totally worth it, ”said Nelson.

Nelson said the lack of space at their current facility means they have had to stack boxes of dog food outside as they attempt to bathe, feed, treat and vaccinate the new arrivals .

The humanitarian society has another task ahead of it – on Wednesday more than 250 adoption applications were submitted. Normally, around three applications arrive for a dog, allowing staff to assess each on a case-by-case basis. This time, said Jeffries, it won’t be possible.

KHS is still working on the dogs, but Jeffries said they will open the adoption process soon at a general meeting at the facility.

“We had to close the app. Otherwise there would have been a lot of disappointed people, ”Jeffries said. “What I’m going to tell people: you have to remember that you need a lot of patience with these dogs because last year they’ve been in a house. They weren’t on the grass. They did not come out. When they had to leave, they would go all over the house. And if you’re not up for it, then this dog isn’t for you.

States decide to stop insurance companies from discriminating against your dog