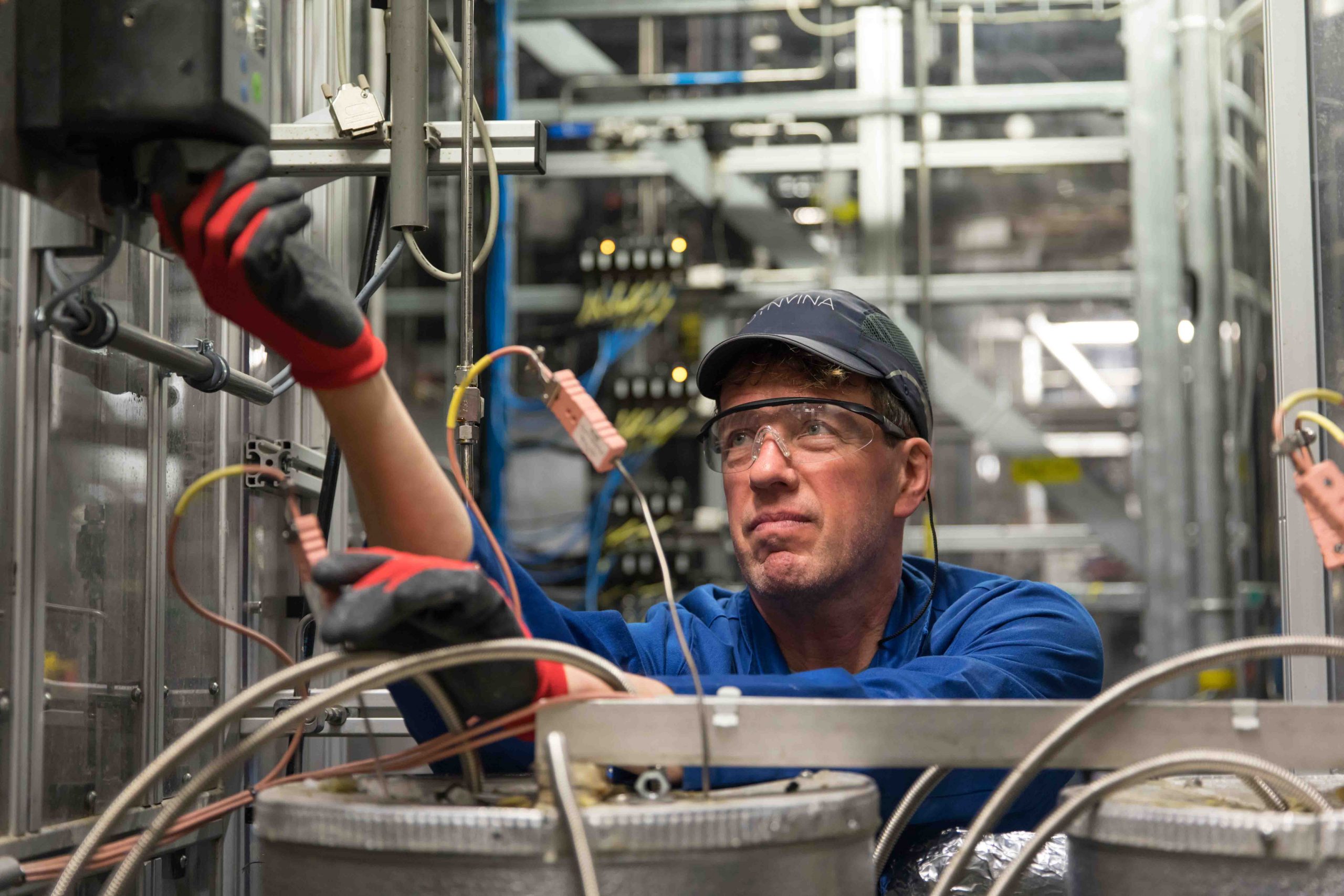 On December 9 of last year, the tech company Avantium announced to the world that a positive decision had been taken concerning the construction of the first commercial plant in the world for the production of 5 kilotons of FDCA (furanic acid) per year, raw material for PEF (polyethylene furanoate). PEF is 100% vegetable and recyclable. The financing has been arranged, despite a year of delay. This was made possible thanks to pledges from Invest-NL (a loan of 30 million euros) and loans from the four big banks ABN Amro, ASN Bank, ING and Rabobank. In total, good for an additional 60 million euros. Contracts have also been signed with customers including the Dutch company Refresco, a bottler of soft drinks, and the Belgian company Resilux, a supplier of rigid plastic packaging.

Tom van Aken, are you happy?

“Yes absolutely! The decision to start building our factory after a trip with so many ups and downs is extremely satisfying. People often think that the quality of plant-based plastics is inferior. But it is not at all. the case with PEF. The advent of the factory is not only the culmination of the hard work of the past 15 years, of all the blood, sweat and tears of our employees. But it is also important to our people. customers, who have placed their trust in us, and also for new customers.And last but not least, this is good news for our shareholders and investors, who have invested in our company.

This “green light” for the construction of a plant for PEF is definitely a historic step in the history of plastics. Do you know when was the last time a new plastic was released to the market? It was 20 years ago; with the manufacture of PLA (Polylactic acid); a biodegradable plastic made from lactic acid. You probably know it from those crumpled bags you put your vegetables in at the supermarket. PLA, however, does not have the right properties for packaging non-alcoholic drinks, for example. However, PEF does.

Want to be inspired 365 days a year? Here is the opportunity. We offer you one “origin of innovation” per day in a compact Telegram message. Seven days a week, delivered around 8:00 p.m. CET. Direct from our newsroom. Subscribe here, it’s free!

What made it so difficult to raise the necessary funds?

â€œIt is riskier for banks to invest in disruptive and innovative technologies, such as those developed by Avantium for renewable plastic and plant-based PEF. After all, there hasn’t been any business experience with PEF yet. Such a transition therefore takes time. The fact that our business hasn’t been profitable in recent years hasn’t helped, of course. This makes it all the more gratifying that we have managed to interest all kinds of parties in the realization of our factory.

But in the end, it paid off. Is there momentum in this regard? If you read the recent report by WWF, for example, big companies want to make their use of plastic more sustainable, while big banks such as Rabobank have also recently expressed their intention to invest in circular manufacturing.

“It’s true. Large companies are also realizing that they need to be part of the process of making more sustainable plastics. And that if they wait longer, it will only become more difficult to make the transition to more sustainable plastics. Plastic variants not only recyclable but also bio-based, however, the question they grapple with is how to go about it.
Additionally, public awareness of plastic pollution – not only in the ocean but also in other parts of the world – has increased dramatically in recent years. Plastic waste is a huge problem. For example, a few years ago National Geographics devoted an entire thematic edition to global litter. I’m a visual person: when you see all of these photos combined, you realize how bad things really are.

You can also read other IO articles on green chemistry through this link.

So, is there a market for alternatives to petroleum-derived plastics?

â€œYes, that also makes a great business case. Our commitment is to have the plant ready by 2023 and operational by 2024. In addition to selling the PEF from our Delfzijl plant, we also want to sell technology licenses to companies around the world. With this type of license, these companies can build their own larger factories for the production of FDCA and PEF. However, to do this you first need to have a commercial factory like the one we are going to set up in Delfzijl, which you can use to show the results to interested parties. With our renewable, plant-based plastic PEF, we believe we will eventually be able to attract an end market of US $ 200 billion per year. Not to mention the climatic gains that can be achieved with PEF.

So how much would that amount to?

â€œWe have independent scientific institutes that calculate the amount of CO2 can be avoided with renewable and bio-based plastics. The first analyzes show that with the production of PEF, more than 50% reduction of CO2 can be reached. This is also what Avantium is looking for with its innovative technologies. We source raw materials for bioplastics from plant sugars, crops such as wheat, corn and sugar beets. We do this for PEF but also for our other technologies.

“Using Spoke technology, the sugars of sugar beets, for example, are transformed by catalysis into sugars of vegetable origin mono-ethylene glycols: plantMEG. It is an essential ingredient for the production of polyesters widely used in textiles and packaging. The other technology is called Dawn technology. This converts inedible biomass, such as wood chips, into sugars and lignin, which can be used as raw materials for the chemical and plastics industries. For example, did you know that leftover wood has a sugar content of around 60-70%? “

This brings us to a thorny question: edible crops versus inedible crops..

“That’s true. But it’s also a question of: you have to start somewhere. And especially at the beginning, the production of PEF will have no impact on the world food market. That is why we are also developing our Dawn technology to convert inedible raw materials into sugars The shift from plastic to non-fossil raw materials is a massive and complex transition. This is exactly why we are able to approach it as an upgrade. ‘Scale. Such disruptive technological innovations are often not feasible for large companies. They are usually not nimble enough for things like that.

You have been Director of Avantium since 2005, you were 35 years old when you were appointed. At the time, you already thought that Avantium – originally a spin-off of Shell – should focus on innovative technologies for the production of bioplastics. Where did you get this idea from?

â€œWell, it’s really not like I predicted all the developments at the time, or that I was at the forefront of the circular economy. At that time, we decided with Avantium to make 100% vegetable plastic from sugars. Later, in 2011, when we partnered with Coca Cola, the idea was born to also make everything 100% recyclable. Coca Cola was asking for it too. And later it turned out that the PEF also collapses if it accidentally ends up in the wild. But when you see how huge the problem of plastic waste is, I don’t even want to talk about biodegradable plastic anymore! Because I don’t think plastic should end up in the environment at all.

I see plastic packaging everywhere. I am a chemist by trade. And every time I see that my hands start to itch – what else could we do with them?

As Arnold Stokking recently pointed out as chairman of the ‘Green Chemistry, New Economy’ coalition of which Avantium is also a part, plastic should no longer be considered as waste, but as a raw material?

â€œExactly! The fact that PEF, unlike plastics made from petroleum such as PET, degrades quickly, is another aspect of safety. But recycling plastic is the answer. Both to reduce waste and reduce CO2 regarding global warming.

This is also the reason why last summer a refundable deposit was introduced for small PET bottles. From what I understand, it takes about 500 years for PET to degrade.

â€œIt can take hundreds or even thousands of years for it to break down, depending on the type of plastic. These 500 years, this is only an estimate. After all, plastic hasn’t been around that long. So we have no way of measuring the exact environmental impact.

So there is still a lot of work to be done.

“Yes. When I walk into a supermarket, I see plastic wrap everywhere. I’m a chemist by trade. And every time I see my hands start to itch: what else could we do with it? I thinks it’s a real shame that sustainability and transitions are often about what we soon won’t be able to do any more. While i think: what can we still do? what opportunities does it offer? green chemistry I am absolutely convinced of the future and consider it a great privilege to work for a company like Avantium, surrounded by like-minded people.

Human society is working on the 2022 challenges | Local news