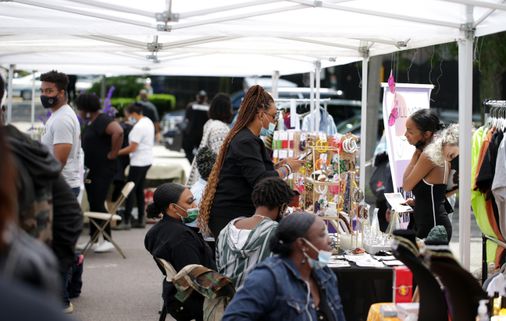 
Acting Boston Mayor Kim M. Janey, whose sister and brother-in-law own the black market and a long-time resident of the area, spoke at the event.

“It’s amazing,” Janey said in a brief interview after posing for photos and shaking hands. “This is especially important as it follows the 100th anniversary of the Tulsa Race Massacre, which attacked Black Wall Street… and here we can see a vibrant community of artists, business owners, residents, leaders. communities who came together to celebrate.

The celebration took place with a “Savor the Square” event in a parking lot adjacent to Washington Street, which was partially blocked off to traffic. Together, the events featured two stages of live music, live art, and a few dozen vendors representing mostly black-owned micro-businesses.

While Janey’s family ties ran deep – she even had a stall selling campaign t-shirts and one of the artists, Genaro Ortega (“GoFive”), painted her portrait with spray paint – most of the time. visitors simply reveled in the camaraderie.

“It makes me feel good to see my community in all areas,” said James Woods Jr., 90, of Roxbury.

One of the vendors, Danielle Kieta, said she was stimulated to see the black community come together and black-owned businesses supporting each other.

“I think this is an important way to claim our community,” said Kieta, owner of Kept Fresh, a company selling bee-derived products.

“I’m in awe of the number of black businesses that are here,” said Vanessa Henry, 41, of Haverhill, who was one of the out-of-town visitors who felt the vibrancy and revitalization of the city. ‘be in the black community.

“I needed some melanin,” she laughs.

Behind the scene, one of the artists behind a huge ‘Black Lives Matter’ mural on the street, William Gallop, spoke with Kai Grant, owner of Black Market, about fresh starts after seeing the energy and dynamism of the street.

“This is how I grew up in Roxbury,” Grant said, discussing community events like Saturday’s which she said declined in the 1990s due to a lack of investment from town hall.

Gallop, 23, a visual artist who grew up near the plaza, said he felt the effects of the decline, explaining how “everything got very gray” there.

But Saturday, he said, was “the happiest I have seen in my community.”

He added: “It creates a new scene. It’s the new era of what culture is like in Boston.

Lucas Phillips can be contacted at lucas.phillips@globe.com.

Company of the week: Pearle Vision