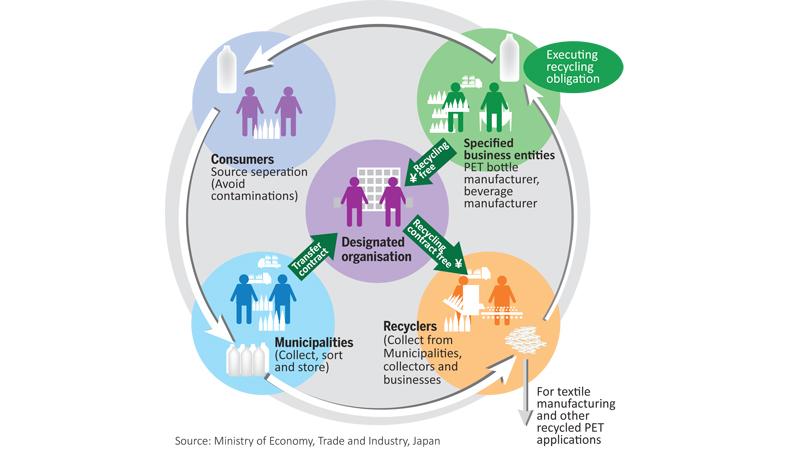 Bottle-to-bottle recycling can accelerate the transition to plastics circularity

Pollution caused by irresponsible disposal of plastics is a significant problem, especially in developing countries like Sri Lanka.

According to Britain’s Royal Statistical Society, it’s estimated that only 9% of all plastics ever produced in the world have been recycled.

This is of particular concern since according to the United Nations Environment Program (UNEP), all nations collectively produce approximately 300 million metric tons of plastic each year, almost equivalent to the weight of the entire human population. world.

However, not all plastics are created equal in this equation. Polyethylene terephthalate (PET) plastics, in particular, stand out, as they are 100% recyclable.

PET is considered the most promising food packaging plastic for recycling and is widely used for this purpose, especially for the production of bottles containing beverages, hand sanitizers, dishwashing liquid, etc.

Additionally, PET is more suitable for the recycling process, given its ability to minimize the possibility of post-consumer contamination.

Thus, unlike the overall recycling rate for plastics, recycling rates for PET bottles in some countries exceed 80%. Sri Lanka also aspires to increase its collection and recycling rate of PET bottles from 27% to 100% by 2025 to “ensure safe, high quality and sustainable products”, in line with the National Action Plan on Plastic Waste Management in Sri Lanka (NAPPWM). .

The technology is not a constraint and is already available in the country. However, achieving this objective requires cross-cutting enabling conditions, including legal provisions and policy changes, stakeholder engagement and dialogue, public participation, funding and capacity development.

Legal and policy changes are needed for a crucial transition to bottle-to-bottle recycling. It involves recycling an entire PET bottle to produce a new PET bottle, a concept that has been successfully implemented in many developed regions.

After being used by consumers, the three common scenarios for PET bottles are: bottle-to-bottle recycling, incineration and landfill.

It is clear that bottle-to-bottle recycling is by far the preferred option among these options.

It reduces pollution and has a host of other benefits, including reducing carbon emissions by decreasing the need for new plastics.

However, Sri Lanka does not legally allow recycled products in food grade manufacturing. The extraordinary notification in the Official Journal n° 1160/30 of June 29, 2010 prohibits the use of “any food in any packaging, device, container or container made from recycled plastic”. This reality needs to change and supportive regulations/policies need to be introduced.

Chemical recycling, on the other hand, uses a chemical process to achieve this goal, to break down the material into its original form for processing and, after that, for the production of new items.

This system allows potentially infinite recycling cycles. Nevertheless, this has implications for the relatively greater generation of carbon emissions associated with transboundary movements of PET waste.

Aside from which recycling method to use, another key consideration is whether bottle-to-bottle recycling carries any risks, as plastics could be potentially contaminated, especially in food-grade packaging. For example, contact between plastics and other wastes, such as e-waste, increases the risk of toxic metals being present in recycled plastics. However, these concerns can be addressed by putting in place the necessary safeguards by adopting models similar to those in developed countries. For example, in the European Union (EU), recycled plastics used in food contact materials must only be obtained from recycling processes whose safety has been assessed by the European Food Safety Authority. food and authorized by the European Commission.

Transition to a “circular” model

Such certification guarantees the separation of different types of waste, household waste collection systems with storage and transport that avoid contamination and technology-driven recycling. Another alternative also exists, in particular chemical recycling to regenerate a material similar to the virgin material.

However, such efforts require collaboration and high levels of awareness among all stakeholders. This includes private sector manufacturers and recyclers, consumers and government.

The model used in Japan provides an excellent case study. In this model, consumers ensure appropriate separation of used plastic containers and packaging, which facilitates the collection of sorted waste by the municipal government. Manufacturers recycle this waste and then use it in products. Therefore, all stakeholders play an equally critical role, which ensures the smooth functioning of the system.

Sri Lanka can also move to a similar model, with high ‘circularity’, which implies a ‘closed loop’. In this, the value of plastics is retained through reuse and recycling, not allowing leakage into the environment. This is different from the current “linear” model in which plastics are used and disposed of, creating significant damage.

Such a model will be beneficial economically – for example, by reducing the loss of foreign exchange due to imports of plastics each year and socially and environmentally – by reducing pollution and its harmful effects – including the increased spread of diseases. such as dengue fever.

Therefore, Sri Lanka should begin the transition to bottle-to-bottle recycling of PET plastics. However, as noted, this requires the support of all stakeholders.

The author is a policy researcher at the IGES Center (Institute for Global Environmental Strategies).

Residents are encouraged to help support the Humane Society Donkeys