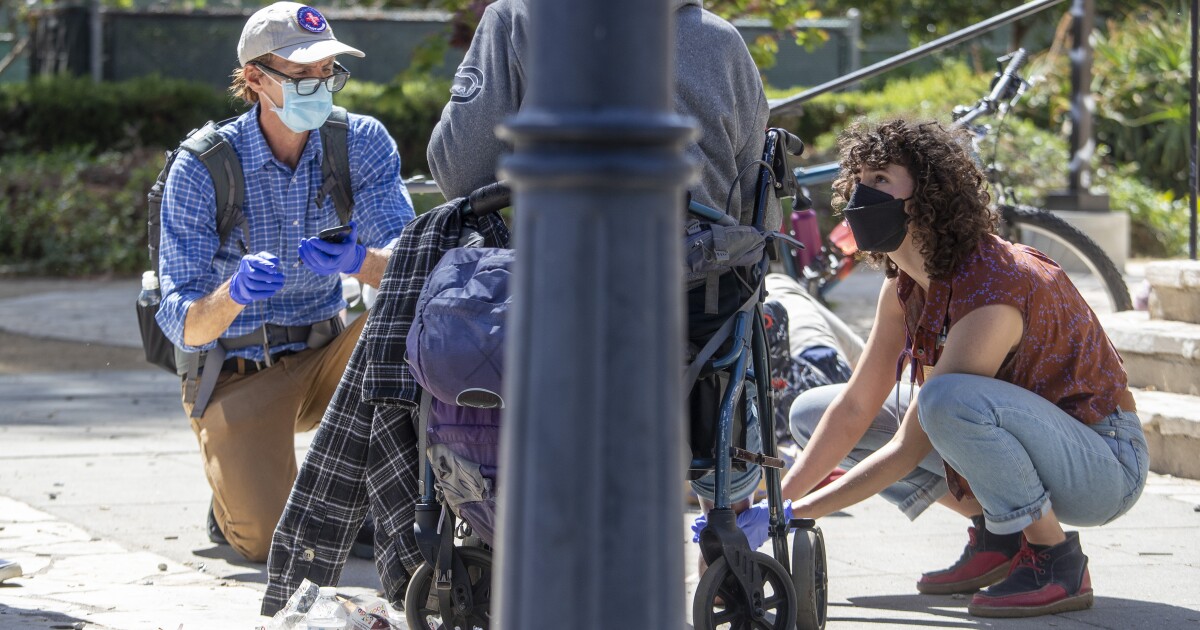 Column: “This work speaks to my heart”: a student helps put primary medicine on the street

The doctor is driving as the van pulls into a Shell station in Santa Monica, where a 36-year-old man with a serious heart condition lives in the parking lot.

Dr. Coley King of the Venice Family Clinic spots Rene behind the car wash, raking the leaves. René maintains the grounds under an agreement with management that allows him to call this place his home.

“We saw him one day and he was swollen from head to toe,” says King, who tells me Rene was rushed to hospital late last summer.

The team gets out of the van. Nick Wenzel is a therapist at People Concern. Jacqueline Ramirez is LVN at the Venice Family Clinic. And Francesca Reinisch is a street medicine intern at USC, where she is about to graduate as a medical assistant.

Wenzel checks on Rene, who gets into the van, where the medical team draws blood and checks his blood pressure and vital signs. He’s in decent shape, according to King and Reinisch. King knows by a pill count that Rene is on his medication, and he tells the team that he has been sober for several months.

“Managing the pills, for heart failure, is a big deal,” King says. “If he continues to take medication, he stays out of the hospital. If he stops the drugs, he fills up with fluid.

René is glistening with sweat and complains of pain in his ribs, back and shoulder. Reinisch checks his lungs and says he sounds good. So maybe he overdid himself with mopping and sweeping. He was assaulted twice, not so long ago, but says there are no lingering injuries.

René tells me that he has been homeless for about 20 years. Wenzel helped René reconnect with his mother in Mexico, and I ask him if he misses home.

“The whole world is your home,” Rene tells me. “The ground on which you stand” is the house. At the edge of the gas station car park, he has installed shelves and planted a garden, with tomatoes and squash. The squash is just starting to grow. “Live life in full bloom,” says a sign he posted in his garden.

Managing René’s health is a task. Finding him a home is another. And shortages abound.

“We are trying to place him in permanent supportive housing and are aggressively seeking creative funding,” King says.

That’s what it often comes down to for caregivers. They work the phones. Call for favors. Toss and hustle for hotel money, for rehab beds. Whatever it takes.

“We really bring health care to where the people are,” Reinisch says. When a patient comes to a clinic, it’s not as easy for the medical staff to get a good idea of ​​the living conditions and the barriers to better health.

In one case, a couple with multiple health issues agreed to move into temporary accommodation, but not without their pet iguanas and risking losing their possessions, including custom-built dollhouses. King was on the phone with an aquarium, trying to persuade them to house the iguanas, while the rest of the team arranged to keep the dollhouses in someone’s garage.

“I love this job,” Reinisch says, telling me that the collaborative, interdisciplinary approach makes managing a person’s health a bit easier and cuts down on bureaucracy.

Reinisch is one of 16 USC students doing field rotations this semester in the street medicine program established by Brett and Corinne Feldman, who teach family medicine as assistant professors at Keck USC. Brett Feldman tells me the couple worked in street medicine in Pennsylvania, and when he came to Los Angeles in 2017 as a consultant, he was “completely blown away by the scale of the crisis here.”

He heard about King’s medical outreach in Venice, “and we knew a lot more people were needed to do this work”, as well as a pipeline from Francescas to join the cause.

Many times over the years, I’ve wondered why Los Angeles, with its tens of thousands of homeless people and multiple daily deaths, didn’t have hundreds of full-service mobile clinics like this. Seems like an obvious first step to getting people well and housed.

Now progress is being made, with several street medicine programs in place, run mostly by non-profit organizations and universities. And Dr. Heidi Behforouz, medical director of the county health housing program, told me that funding had been secured to operate four medical vans.

During the pandemic, they operated with COVID-19 funding and focused on vaccinations, she says. But medical teams identified many untreated conditions — including injuries, chronic illnesses and substance abuse — that argued for full-service mobile units.

“I wish we had more vans, and that’s just not the case at the moment, but it’s a start. This is the beginning of our revolution,” says Behforouz. She tells me she is working to link all of the county’s mobile medical teams to the same database, so that wherever a patient is contacted, caregivers have access to medical histories and prescriptions.

Back behind the wheel, King takes the team down to the beach and Wenzel goes in search of a patient on bipolar treatment. The patient is waiting for housing, King says, and one of the final hurdles is that a doctor must pass an exam and sign a disability verification form to open a door for funding.

Wenzel returns to the van with Kevin, 43, who tells me he can’t wait to get inside and get back to work. He has welding experience. On the beach, he says, he can’t drift off into a deep sleep because someone might steal his things.

King asks Kevin how he’s doing and Reinisch moves a stethoscope to his upper body. She says to King:

“I definitely had wheezing in my lower right lung,” she says. She checks Kevin’s prescription and finds that he is good for another year of asthma medication.

King, who wrote the curriculum for trainees like Reinisch, tells me he can often tell early on which students have the willpower, patience, and temperament to become good at street medicine. He knew right away that Reinisch had a desire to do his part in the midst of a bountiful humanitarian crisis.

“This work speaks to my heart,” says Reinisch.

It’s a job that demands a great way to tend to the bedside, as many homeless people don’t believe anyone is ever there to help them. King, with his folksy and engaging manner, is a master at putting patients at ease.

“He’ll kind of just chat with people, like they’re a friend, or just want to get to know them. And in that conversation, he’ll ask pointed medical questions…and use his casual, disarming nature to build a medical history” that will help her build a treatment plan, Reinisch says.

She says she was not surprised by the number of mental illnesses, chronic physical illnesses and addictions she sees. But trauma may be more common than she expected, and it’s often early childhood trauma with effects that last for years. She also observed how poverty affects health and health affects poverty.

Reinisch says a big surprise for her is the level of intellectual development challenges that make it difficult for people to sort through options and make decisions in their best interests. She learned to listen, to try to live in her patients’ world, to share goals, to compromise.

And keep coming back.

In current Los Angeles mayoral and council campaigns, there’s a lot of back-and-forth among candidates about how many times you should have to offer someone help before you crack down. Once? Twice?

No two cases are the same, and some people can benefit from a little incentive. But thousands of people are so damaged and distrustful that you can’t begin to help them without multiple repeat visits to build trust.

A good example of this is being played at Reed Park in Santa Monica. Reinisch examines the severely swollen foot of a man in a wheelchair whose right side is paralyzed. King monitors a woman he treated for drug addiction and life-threatening infections.

Together, King and Reinisch stumble upon a homeless man King has known for two years. The man virtually avoided any sensitization until recently when King broke in and prescribed medication for schizophrenia. During their last visit, the man was not very talkative and refused to have his blood pressure taken.

This time, he lets Reinisch take his blood pressure, which is 110 over 80. He tells King that he is on medication, and King tells him that his speech and thoughts are much clearer. They talk about putting him in supportive housing, and the man says that’s something he has to work out in his head, but he’s not shutting the door on the idea.

“It’s a home run,” King says as he and Reinisch make their way to the next patients.

It’s not a leap, it’s just a small step. But it is progress.

“That’s how you win the game,” King says.

How much would you pay to keep your puppy alive? | Money