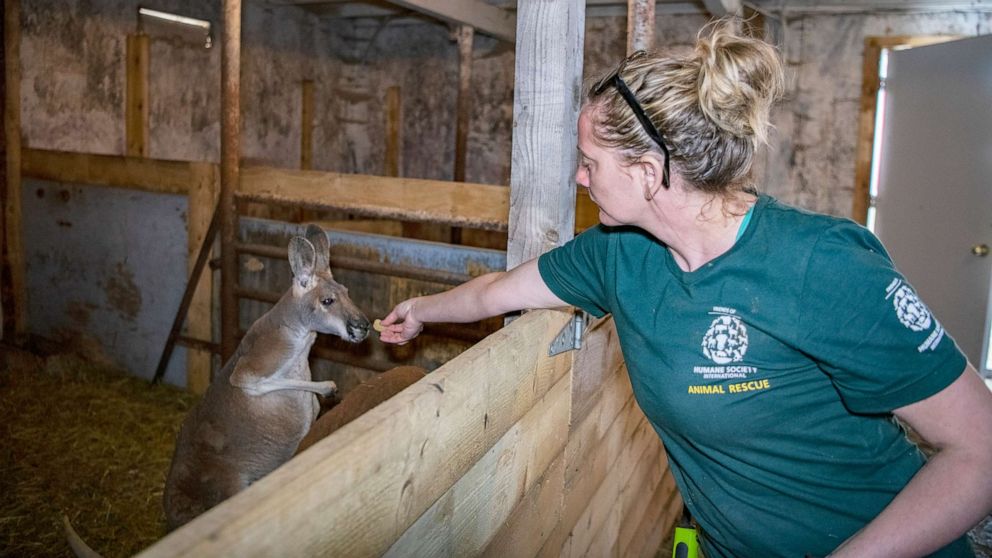 Four kangaroos named Ross, Rachel, Joey and Chandler are among several exotic animals thriving at a Texas sanctuary after being rescued from a roadside zoo.

The Humane Society rescued more than 200 animals from Saint-Édouard Zoo in Quebec, Canada, in 2019, according to the organization, which described the unaccredited zoo as “decrepit” and “sterile”.

The barn where most of the animals were kept was dark, full of cobwebs and thick with the smell of ammonia and dust, said Kelly Donithan, director of animal disaster response for Humane Society International. Rescuers found rows of stalls with isolated animals and a big cat “house” that consisted of a shed on a dirty cement floor and enclosures with weakened places that were dangerous for cats to chew on, Donithan said. .

“It was like most roadside zoos – to a visitor it might seem okay, as most of the cruelty was hidden from paying patrons,” she said. “But we saw failing and dangerous fences and cages, chewed up stalls containing malnourished and lonely animals, dead animals just below the ground and animals that need to be in anxious and alone social groups.”

The rescue operation lasted three months, and the legal process to find homes for all the animals took even longer.

When Black Beauty Ranch took in the kangaroos, named after the rescue team’s love of the ’90s sitcom “Friends,” there were just three of them: Ross, Rachel and Joey. When rescuers discovered Rachel was pregnant, they named Joey Chandler, Almrud said. The three kangaroos were found in a dark indoor enclosure huddled together, according to the Humane Society.

Chandler “never experienced the neglect his parents and sister suffered” and now weighs 120 pounds, according to the Humane Society.

Other rescued animals brought to the sanctuary include 7-year-old tigers Serenity and Theodora, who are “very affectionate towards each other and greet staff with chuffs and rubs along their fence”, according to the Humane Society.

Douala the lioness, around 4, loves to sit on her platform and wave to her caregivers at the fence as they arrive with treats, and Zuko the zebra, who was found chewing his way out of his enclosure, is “curious” and “courageous”, according to caregivers.

A wildebeest, a nilgai and an emu were also brought back from the Quebec zoo, according to the humane society.

The sanctuary, home to 800 animals and more than 40 different species, is also where a Bengal tiger, which was seen roaming the streets of Houston for nearly a week, was moved after it was captured.

The “nightmare” experienced by animals at the roadside zoo is now over, Kitty Block, president and CEO of the Humane Society of the United States, said in a statement. The animals “thrive” and roam multi-acre pastures and open habitat with shelter to protect them from the elements in which they can bask, Almrud said.

“Our main mission is to take in animals that no one else wants, that have been abused, neglected, abandoned, and we provide them with forever homes with as much dignity and respect as possible for the time it takes. their rest,” added Almrud.

The former owner of Saint-Edouard Zoo pleaded guilty to animal welfare violations regarding how and where the animals were kept, including inadequate and unsanitary facilities, and lack of veterinary care, according to the Humane Society.

“Roadside zoos put profit before public safety and animal welfare,” Block said. “No animal should be forced to languish in deplorable conditions. At Black Beauty Ranch, these animals finally have the chance to be themselves and express their natural behaviors.”

The hundreds of animals were transferred to accredited facilities, the organization said.

Almrud, who rescues many animals from the exotic pet trade, warned people against buying or selling wild animals.

“These animals take a lot of work, a lot of care and a lot of money to keep them happy and healthy,” she said.