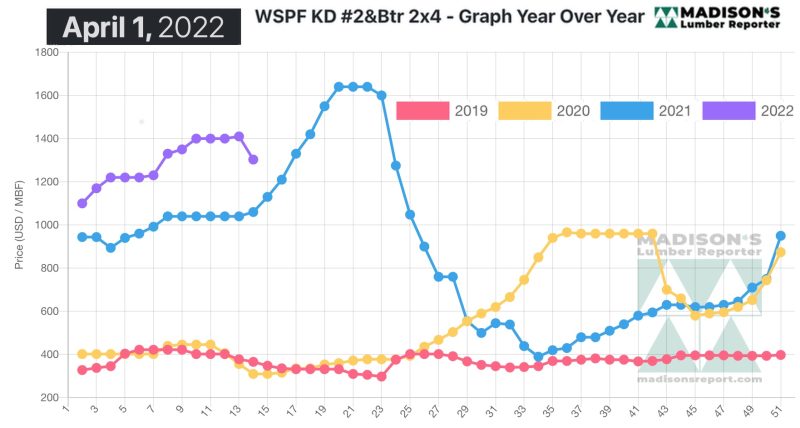 Western SPF producers in the United States have reduced asking prices on some of their most commonly traded products in an effort to attract wary customers. And in Canada, while prices remained extremely variable and confusing for buyers, downward pressure was evident for western SPF wood items. As we approach the time of year when most of the largest lumber customers – America’s major homebuilders – have been shopping for projects scheduled during the busy spring construction season , the demand for lumber generally weakens. Last year that didn’t happen, but this year it looks like some of the usual seasonal cycles might return.

Booming construction activity continued to spread upwards from the southern United States as spring weather descended on the higher latitudes of North America.

Players in the United States have reported widening pricing in the already established two-tier market for Western SPFs. Sawmills showed greater availability of cash lumber and became aggressive with their pricing, but buyers were unimpressed with typical four- to six-week shipping times. Order files from the sawmills were only available for about two weeks.

In Canada, the straits were the most affected by the drop in prices, while the low grades were relatively firm. Western Canadian sawmills showed greater availability as April approached, with order files ranging from prompt to four weeks.

“Eastern SPF product prices continued to erode this week amid wary buyer activity. Eastern Canadian suppliers reported better sales volumes over the week and the numbers fell to levels that brought some hesitant customers back to the table Ongoing transportation issues have kept traders on their toes A veteran player noted that the inability of Canadian factories to ship on time has pushed a growing contingent of U.S. buyers to source more readily available products, including SYPs from Southern states and European spruce entering U.S. ports.—Madison Lumber Journalist