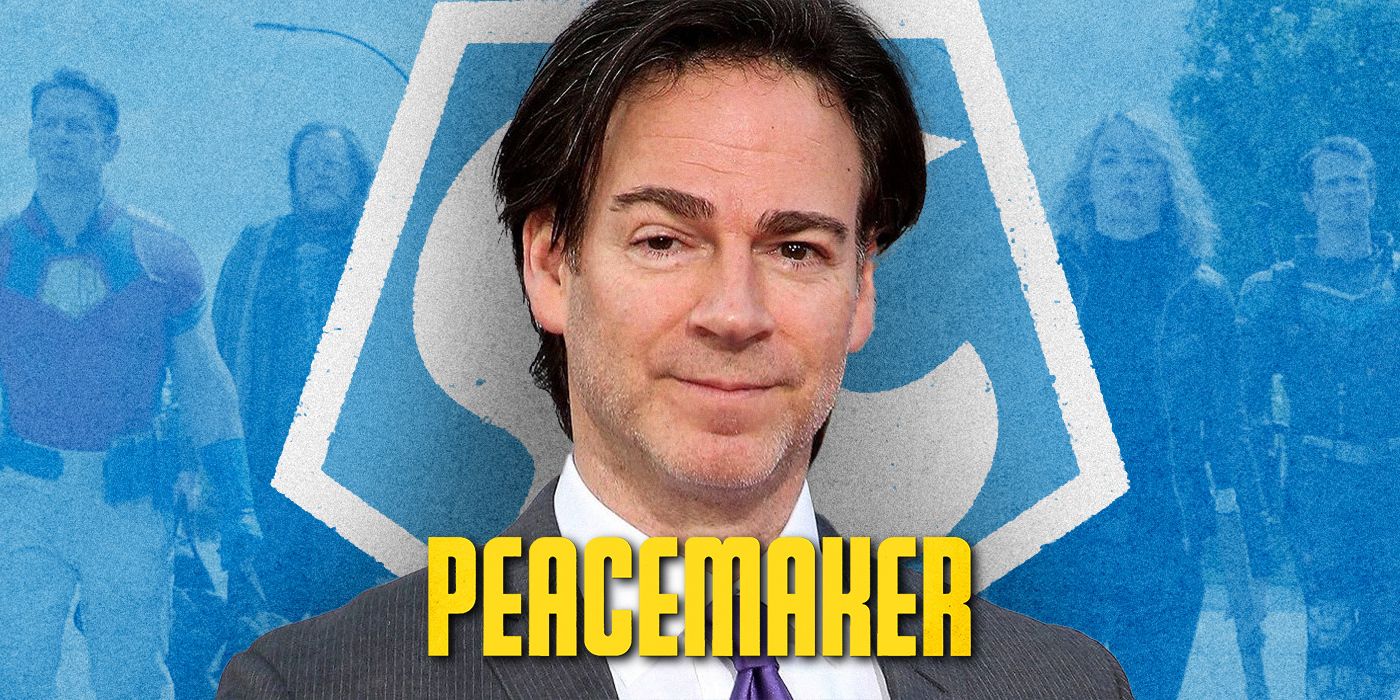 With writer-director by James Gunn Peacemaker now streaming on HBO Max, I recently spoke with the producer Saffron Stone to make the fantasy series. During the interview, he talked about how Gunn wears his heart on his sleeve, the opening credits, why he loves the finale, Peacemaker’s relationship with Eagly, and more. Additionally, he talked about how the director by David F. Sandberg Shazam! following (Shazam! Fury of the gods) has more action, big baddies and more humor, and his dream film project, which is about the first meeting of Winston Churchill and Joseph Stalin in 1942 in Moscow called winston and joe.

COLLIDER VIDEO OF THE DAY

As most of you know, Peacemaker resumes after the events of The Suicide Squad. The movie’s post-credit scene showed how the anti-hero survived Idris Alba‘s Bloodsport shot at the throat and how Viola Davis‘ Amanda Waller still wasn’t done using it in her mysterious plans. Gunn wrote all eight episodes of the series and is directing five of the series episodes. Management will also be Jody Hill, Rosemary Rodriguez, and Brad Anderson.

In addition to John Cena back as Peacemaker, the series will also see the return of The Suicide Squadit is by Steve Agee John Economos and Jennifer HollandThis is Emilia Harcourt. Peacemaker also stars Freddie Stroma as a judge, Danielle Brooks like Leota Adebayo, Chukwudi Iwuji like Clemson Murn, and Robert Patrick as Peacemaker’s father.

Watch what Peter Safran had to say in the player above, or you can read the transcript below.

COLLIDER: Let me start with congratulations for Peacemaker. I saw the first seven and begged James to show me episode eight. And he’s like, “No way.”

PETER SAFRAN: Steven, I love episode eight in a way that I can’t even describe. When you see it, you’ll understand why we didn’t reveal it sooner. But it’s the culmination of all these incredibly intricate threads he’s woven from one through seven. They all come together beautifully in 108. I love it. I think one of the great things that James was able to do is give real character development and arcs to the whole ensemble, not just Peacemaker.

I was wondering if it was a VFX reason. But he’s like, “No, it’s just for spoiler.” He’s like, “I don’t want them going out there.” I’m like, “I don’t blame you. I get it.” You’ve produced a number of things, but I know there must be some stuff in your back pocket that you’re waiting to get done. If you had the opportunity to get funding for any project tomorrow, what would you do and why?

SAFRAN: I think it must be the Javelin-Weasel odd couple show. They live together in New York, they’re roommates, and that’s just their life together in New York. No. Listen, we have other things in development that are real priorities. A few spin-offs, a few originals. I think DC has such a well of characters. Ultimately, it’s about finding the right filmmaker to pair those properties with. ‘Cause you need a James Gunn to say, “You know what would do the suicide squad job? Let’s do it like a 1970s war movie.”

RELATED: James Gunn on “Peacemaker,” The Secret Around Episode 8, That Opening Song, and Giving Peacemaker a Bald Eagle for a Partner

I don’t even mean just DC. I just mean in general.

Is there a script you’ve had for years like this needs to be done?

SAFRAN: Alright. Yes. I’ll tell you, there is. It’s written by this, it’s going to sound weird, this British historian Simon Seabag Montefiore. It’s called winston and joe. And this is the first meeting of Winston Churchill and Joseph Stalin in 1942 in Moscow when Churchill goes there to meet him and prevent him from capitulating. It’s like Frost/Nixon but with these two great characters. This is what I would like to do. So Steven, if you could provide the funding for that, I’m ready to make that movie this year.

Sometimes putting it in the ether like that, you never know.

SAFRAN: I think this is the first time I’ve said it out loud. So that could be my manifestation. Thank you.

Exactly. You’ve been working with James I think since 2007, 2008. It’s been a long time. Maybe even earlier and I don’t know. What do you think would surprise people to learn about James based on your long history of working with him?

SAFRAN: I don’t know if people would be surprised because James, he wears his heart on his sleeve. James is pretty much an open book creatively, the things he loves, the things he hates. He never really hid who he is. I don’t know if people would necessarily be surprised by anything about him other than… No. I think people know who he is. If you saw To glide, Great. guardians of the galaxy, Peacemaker and The Suicide Squad, you really know a lot about James because he’s been given incredible creative freedom to do these shows and talk about the things that matter to him, whether it’s his toxic masculinity, father-son relationships, mother-daughter relationships, family relationships, darkness, depression, what it’s like to be an underdog, what it’s like to be an underdog. I think it’s pretty much an open book.

So obviously like everyone else, I love Eagly. Eaglely is going to be one of the favorites on the show. How was it for you though? Because you’re obviously doing this on a budget, how was it when you read the script and James said to you, yes, we’re going to have a bald eagle as a pet and he’s going to be a very big part of the series .

SAFRAN: Oh, I loved it. He was always talking about Eaglely. Even before writing these episodes, I think he really talked about the bald eagle being his sidekick/best friend. I like the way James anthropomorphizes animals. If he can make you care about a talking tree or a raccoon or what he did with Sebastian or Weasel in The Suicide Squad, I couldn’t wait to see what he was going to do with Eaglely. I love the character. There is a kind of nurturing side to him. He really wants to protect and take care of his best friend Peacemaker. I love what he did with it. So no, we embraced the Eaglely idea, just like HBO Max, instantly.

Also, the thing about James is that he makes all of his animal characters feel like flesh and blood. You know what I mean?

You really care about these characters.

SAFRAN: Absolutely. I mean, listen. Even from that first episode where Eagly puts his wings on Peacemaker and then coming back to it later, it brings tears to your eyes. You can’t believe you’re emotionally engaged in a bald eagle hugging a reprehensible human being like Christopher Smith.

100% agree with you. Obviously I’m going to touch on something else, I talked to Zach (Levi). Listen, you know I love Shazam. I was lucky to be on set. I spoke to Zach recently and he thinks the sequel is even better than the first. What can you say?

SAFRAN: Well, even if it’s a Peacemaker conversation, but I loved the first one Shazam movie. I thought it was beautifully done. I thought David Sandberg nailed that tone so well. The needle’s eye was so small to get it right, but it really pulled it off. I feel like this second one has more emotion, more humor, but it also has more action, bigger sets, bigger bad guys. I just feel like that’s all we loved in the first movie, but really went down to 11. So I love that. I think adding some of these new characters with Rachel Zegler and Helen Mirren and Lucy Liu are fantastic edits. I love that the kids are all a little older now, so we can have a little more fun in a more edgy way with them. Zach inhabits this character in such a beautiful way. So to have been able to do a second one is a thrill.

Well also, the other thing is that when you make the first movie of anything, you figure out what’s going to work and what resonates with the fans. The first movie is so good and people love it. I’m sure it gave you more freedom on set to push further what you wanted to do.

SAFRAN: Yes, I think so. The glory of having the same filmmaker, David Sandberg, who lived through the first and really knew what he wanted for the second to amp it up, it was a great shoot. It was very, very smooth. We had an amazing script from Henry Gayden and Chris Morgan, so it was a really smooth shoot. I think now, after seeing cuts of the film, that really reflects in this final product.

I just have to tell you that the opening credits of Peacemaker are A+. I love them so much I could keep screaming how awesome they are.

SAFRAN: Would you like to taste it? No. I mean, listen. James wrote this choreography in the very first draft I’ve ever read of episode one. He was like, “Here’s the intro, here’s the dance number.” Here is the fully choreographed dance number that they take seriously, that they take seriously. And that was it. He always knew what he wanted. But I love it and hope we’ve created something must-have. I hope people watch it every time.

I watched all seven episodes and each time it made me smile. Seriously.

I love it. Hey listen man, I only wish you the best.

The first three episodes of Peacemaker are now streaming on HBO Max.

James Gunn on “Peacemaker,” The Secret Around Episode 8, That Opening Song, and Giving Peacemaker a Bald Eagle for a Partner

Steven Weintraub launched Collider in the summer of 2005. As editor, he grew the site from a small bedroom operation to millions of readers around the world. If you want to follow Steven on Twitter or Instagram, you can expect plenty of breaking news, exclusive interviews, and photos of cats doing stupid things.

When can puppies and kittens go outside? – Forbes UK Advisor