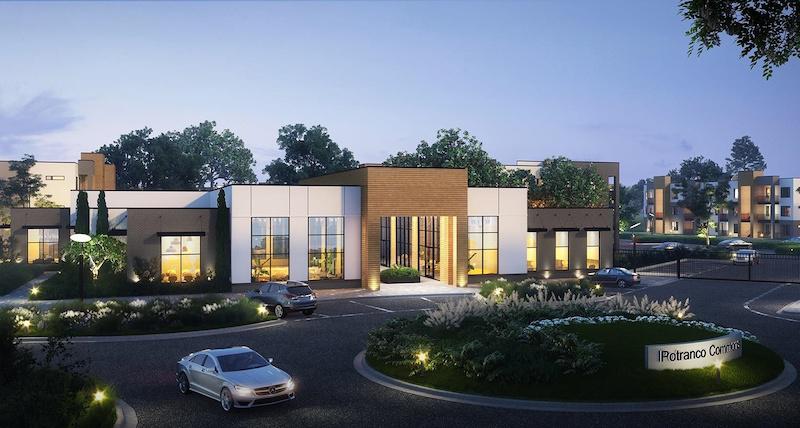 The Lynd Group, Santikos and the San Antonio Housing Authority are partnering on the $69 million project, which will receive a property tax exemption in exchange for including units for low-income residents.

The 360-unit complex near Loop 1604 and Potranco Road will feature one- to three-bedroom apartments ranging from 533 square feet to 1,345 square feet, according to an announcement.

“These types of projects are in high demand,” said A. David Lynd, CEO of The Lynd Group, at a recent groundbreaking ceremony.

On ExpressNews.com: Housing authority partners with Lynd Co. for apartment complex in ‘action-packed’ neighborhood near The Pearl

Forty percent of Potranco Commons housing will be for residents up to 80 percent of the area’s median income, or $58,000 a year for a family of four.

Ten percent of the units will be for residents earning up to 60 percent of the area’s median income, or $43,000 a year for a family of four. The rest will be rented at market rates, ie whatever price the market can reach.

Rents will range from $834 for the cheapest units to $1,865 for the largest unit at market rates, SAHA spokeswoman Marivel Resendiz said. Potranco Commons will also accept housing choice vouchers.

The facilities will include a clubhouse, swimming pool and fitness center and construction is expected to be completed in the second quarter of 2024.

The late John L. Santikos owned the land for many years, said Tim Handren, CEO of the company and mayor of Boerne. Santikos, the San Antonio-based movie theater chain, planned to build a 65,000 square foot theater on the site called Granada. He eventually built the Casa Blanca megaplex about four miles north at Alamo Ranch Parkway and Loop 1604.

“We were looking for a top-notch partner to do housing here,” Handren said at the groundbreaking.

On ExpressNews.com: These San Antonio zip codes had the most home sales and the biggest price increases in 2021

The company has worked on the deal with SAHA and Lynd for about three years and sold nearly 21 acres last month to a Lynd-affiliated company, deed records show.

SAHA’s public utility company then acquired it and will lease the land to the developer, exempting it from property taxes under state law and sales taxes on purchases made for construction.

In return, at least half of the units must be for residents earning up to 80% of the region’s median income.

Lynd is working with SAHA on two further apartment developments off Loop 1604 and Culebra Road and near Pearl.

Considerations for the health benefits of your business